Kingfisher and the Colonel

Who me eat your sunflower

Let’s Go out for donuts in style

Folks are beginning posting their favorite holiday food ideas,which I haven’t gotten around to, but I was inspired to put together this collection of “hunger game” snapshots when came upon this Edsel in a parking lot yesterday. By the way I was going to the Dollar Store next door. They have great decorations and containers for Paper whites.

If you start now they could be blooming by Christmas if you put them in a dark room. And if you want to know when it is dark here is what Wikipedia has to say about the setting of the sun. They call it twilight. 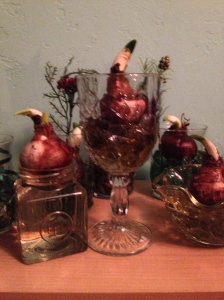 The Three calcification of Sunset or Twilight are: Civil, nautical, and astronomical twilight. The Sun is shown to scale.[2]

Twilight is defined according to the solar elevation angle θs, which is the position of the geometric center of the sun relative to the horizon. There are three established and widely accepted subcategories of twilight: civil twilight (brightest), nautical twilight, and astronomical twilight (darkest).[1]

Why? Sailors, who navigated by the stars, needed to know when it would be dark enough to see the first star. Usually Venus or Mercury. If you’re still reading you deserve a star. Happy Wednesday!

Thanks for stopping by.