Not too scary but This entranceway was right next to where we were staying in San Miguel Allende, Mexico. The looming skeleton lady gave a fright as we passed by late at night,

I asked about here and was told by the locals that she was Catrina the Keeper of the bones. Here’s only part of what Wikipedia offers as explanation. 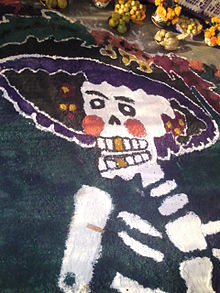 The calavera’s ties to the past heritage of the Aztecs can be seen in various ways. The indigenous culture of skulls and the death-goddess Mictecacihuatl is common in pre-Columbian art. Lady of the Dead, Mictecacihuatl, was keeper of the bones in the underworld, and she presided over the ancient month long Aztec festivals honoring the dead. With Christian beliefs superimposed on the ancient rituals, those celebrations have evolved into today’s Day of the Dead.[4]