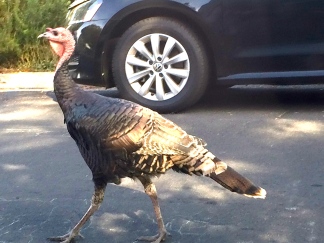 Benjamin Franklin had it right when he argued that, while the eagle was a poor choice for the Great Seal as “a bird of bad moral character,” the turkey, though “a little vain and silly,” was “a bird of courage, and would not hesitate to attack a grenadier of the British Guard who should presume to invade his farm yard with a red coat on.” In short: Turkeys are not to be messed with.

Texas Turkeys
The ancestors of the birds we see in California today were released by the state Department of Fish and Wildlife starting in 1959. The birds, from wild Texas and Colorado stock, were smarter and hardier, and California’s conditions were perfect for them.

Turkey Comeback
Long an American underdog, turkeys are having a comeback. Millions roamed the United States, Canada, and Mexico when European colonists arrived, but turkey habitat disappeared as land was cleared for development. [So they have become a problem] They tear up gardens, scratch the paint on shiny cars, raid outdoor pet food bowls, and leave trails of cement-like mounds of poop wherever they go.

Will You be Eating Turkey Tomorrow?