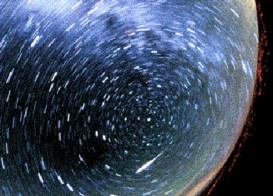 Do Me a Favor

if you are in the Northern Hemisphere and have a clear night  sky please go out after midnight and enjoy the Orionid  Meteor Shower.  I won’t be able to see any shooting stars because we are covered with a thick blanket of fog in the Bay Area.

Even when I can’t see them it is fun to know the sky is full of shooting stars.

Here is what our local E New Paper The Albany Patch has to say about what you might see tonight: Even when I can’t see them it is fun to know the sky is full of shooting stars.

“Earth will pass through a stream of debris from Halley’s Comet beginning on Monday. The show will give us the benefit of the annual Orionids meteor shower— though you probably won’t see much until a bit later.

The shower should be at its peak the night of Saturday, Oct. 20, until just before dawn on Oct. 21. This year, the moon will be setting at approximately midnight, which will keep the sky darkened enough that — barring cloud cover — you should be able to see up to 15 meteors per hour.

Some tips for meteor watching in general are on the EarthSky website. For this meteor shower, it’s recommended you view it from open area away from city lights.

What makes this shower so cool? First of all, c’mon — it’s a show of shooting stars.

Also, though, there’s no question about where to look for this one. Meteor showers get their names from the constellations in the sky where they can be spotted. And what’s easier to spot than Orion the Hunter?

The stars tend to shoot from Orion’s club, pierce Taurus the Bull, the Gemini twins, Leo the Lion and finally, Canis Major, home of Sirius, the brightest star we can see — well, aside from the sun.

There’s also something else that’s special about this show: With the second-fastest entry velocity of all the annual meteor showers, meteors from the Orionids produce yellow and green colors and occasionally produce an odd fireball.

To make sure you get the best view possible, remember to check the weather forecast and conditions before you head outside to watch.”

5 thoughts on “All Hail Halley’s Comet!”