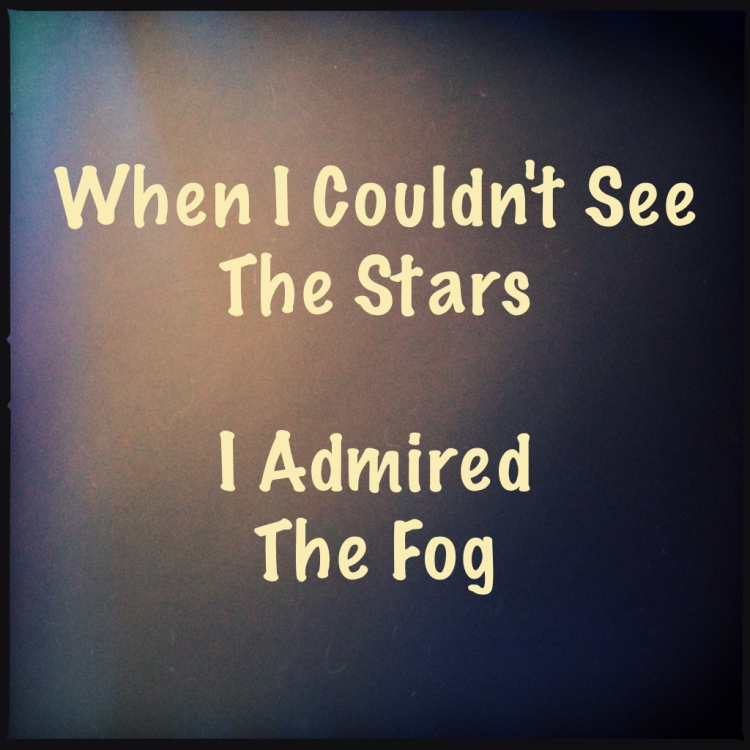 Monday I suggested every one get out and view the Perseids Meteor Shower this week. Taking my own advice; at midnight last night I pick up a friend and we drove in the dark, on twisty roads up to the highest place around to be greeted by a blanket of fog. Good thing I brought a sleeping bag, we were determined to stay one hour because that is the amount of time recommended to see the shooting stars. Ha! But we bravely got out our chairs and, sleeping bags hot drinks and settled down in the parking lot with a dozen other courageous souls. Well I think there were other folks there because we heard voices and saw headlights floating in and out of the fog. Off in the distance we heard wild life and thus began a discussion of whether it was owl, hawk or mouton lion, with us adding our own hooting and growling noises. So far not one star shooting showed itself  however I was happy, contented even to be out in the night smelling the sage from the fields just out of sight and feeling fresh air on my face. After a while we began to admire how car lights and city lights off in the distance reflected and refracted in the fog and hoped against hope maybe one meteor would break through and show itself. But I knew it was time to go when a cold wind found its way down the back of my neck and clouds were accumulating among the near by trees. Before we left  took one photo of the fog, that is what you see behind the words above.

The Only Meteor Shower Seen

Jennifer Nicole Wells One Word Challenge was Snow this week I couldn’t give her any but, white-out is as close as I could come. I think fog was last week which I know a lot about.

I haven’t given a shout out to Becca Givens and her weekly Nurturing Thursday Post  but this adventure into the wilds of Tilden Park was a very nurturing experience for me. Hope you enjoyed my report.
I want to hear if you did or did not see a shooting star